This morning, Leelanau County and much of Northern Michigan woke up under a blanket of mist and fog. The fast melting snow and suddenly warmer temperatures reminding us that we live at the triple point, water in all forms; and in a region where there’s plenty of weather to talk about.

Taking a little time before rushing on to work, I watched a small patch of rising fog lift, dodge and drift across the tops of trees below my hilltop house. Once a smokejumper in Idaho told me those little clouds can be mistaken for rising smoke by the uninitiated fire watcher, but they’re just water dogs. It stuck. I’ve called them water dogs ever since. 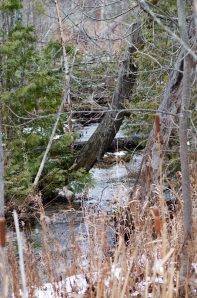 Of course, the best part of such mornings is stepping out to wander, even if only for a few minutes. Something just a little mysterious or fantastical in the drift and slide of things, hidden and revealed. There’s always something new, some encounter offered up if I’m watchful and open to it. Like a new pattern of rifles in Shalda Creek or some color shift in the light across Bohemian Valley.

Every so often, there’s an encounter that just seems odd. Like this slug making its way across a lingering patch of snow. This little shell-less gastropod looked completely out of place and a bit disturbing. Caught for a moment in that lingering childhood fascination with things slimy and weird, that sense of wonder returns. How many millions of slugs were pulling their way through the leaves on that small hill in Leelanau right at that moment?

Not familiar with their names, I can’t say if this was one of Michigan’s many invasive or non-native species (examples:  https://www.msu.edu/~atkinso9/pestsnailpage.htm). Then again, are any of them truly native? The glaciers left this land scraped clean 8,000 years ago; what little crawler survived? And they are mostly big pests to growers everywhere, damaging fruits, vegetables and flowers. Still, slugs are another part of nature’s big recycling system – both as detritus munchers and food themselves.

Ah, but this morning, that little creature brought me a moment of pause and reflection. Slowing my pace just a little to wonder how an egg-laying, hermaphrodite revived to foot about at such a strange time.