The Grand Traverse Bay Area has become the technology hub for Northern Michigan. And we have both the data and the videos to prove it!

Earlier this year, I completed a research and science communications project for the Traverse City Area Chamber of Commerce (http://tcchamber.org/) and their economic development group, Venture North. I found literally hundreds of advanced manufacturing and technology companies. Lots of them are leaders in their fields, with patents and copyrights on logistics systems, laser technologies, precision machine tools, database designs, and lots more. 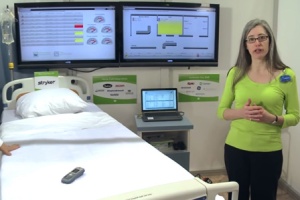 I loved working on this project. Building the website content and interviewing our region’s technology leaders and young entrepreneurs was both enlightening and fun. Their personal stories of challenge and success are simply inspiring. If you’re interested in learning more about Technology Unsalted, take a look at: 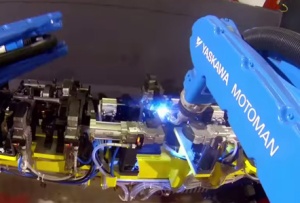 Creating video-based narratives is one of my great joys. Working with creative, engaging artists like Bill Allen makes it even better. (The video is for his website.)

With a studio tucked into the hills of Leelanau County, Bill Allen has been creating amazing sculpture for

over 30 years. The animals and other creatures are sometimes lifelike, sometimes more fanciful, but always engaging and beautiful.

Over the years, Bill has developed beyond the familiar animal sculptures. His creative drive took him to New York for several years, where he explored new art forms. He began express himself in paintings and wall hangings. Back in Leelanau County, he developed a form of unique mixed media art, including colorfully painted structures that incorporate materials found along the beaches of Lake Michigan.

A man of great integrity and creative drive, B

ill is also one of the nicest people I’ve ever met. Creating a video presentation

of the man and his work was a real pleasure.

Take a good look at Bill’s website to get a feel for his newest work. Of course, you won’t want to miss his animal sculpture either on display at the Main Street Gallery, Leland, MI as well as Shidoni Gallery in Tesuque, New Mexico and Bier Gallery, Charlevois, MI.

Over the past 40 years or so, Dr. Daniel Palmer and his wife, Helen, purchased more than a dozen adjacent parcels of forest land to create the largest privately held tract of forest in Leelanau County. 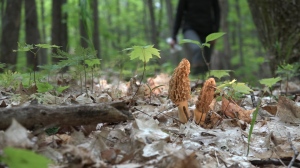 All this time, the land has been carefully managed for sustainable timber production with the guidance of professional forester, Richard Cooper.

Last week, the Leelanau Conservancy announced their intention to purchase about 700 acres of the Palmer Woods to create a special forest reserve. The Conservany’s goal is to preserve this working forest and open it to the public for passive recreation such as hiking and cross-country skiing. The fund-raising effort is now in full swing.

To support that effort, I was asked to develop a video that would very briefly explain what this project is and why it’s needed. My work included helping to develop the script, shooting all the video, collecting audio, editing, and post production work. A special thanks to my friend, Jim Anderson for getting me up in the air and safely down again for those aerial shots. You can find the video, “Saving the Palmer Woods” in HD on YouTube here.

A more detailed description of the effort to create the Palmer Woods Forest Reserve can be found on the Leelanau Conservancy’s website.

In addition to protecting a large part of the Glen Lake Watershed, the Palmer Woods will give all of us a very visible example of what sustainable forestry looks like in this time of increasing rapid climate change.

A couple of months ago, I found myself waiting in the drafty security area that sits between the two halves of Constitution Hall in Lansing while a guard called Christopher L. Hoving to come down and escort me into the building. The two halves house Michigan’s Department of Environmental Quality (DEQ) and Department of Natural Resources (DNR). In the Wildlife Division of the DNR, Chris is the Adaptation Specialist who works with counterparts in other Great Lakes States in assessing how best to manage wildlife. He is also the lead author of a report issued nearly two years ago called Changing Climate – Changing Wildlife. The report describes the results of an effort to assess the vulnerability of Michigan’s best known wildlife species to the impacts of climate change.

Chris had agreed to talk with me about the report and the implications of what he is learning. Though the conference room was a bit noisy and I am a novice at managing my own video equipment for interviews, we both gave it a go. What follows is short summary of our one-hour discussion with links to a few short video clips from the interview.

Working with a number of different experts in the DNR and the Michigan Natural Features Inventory (http://mnfi.anr.msu.edu/), Chris helped to characterize the vulnerability of individual wildlife species to the various impacts of climate changes now overtaking Michigan. The methodology for this assessment was provided by NatureServe, a respected conservation science group with many partners. In general, vulnerability can be seen as a combination of a creature’s sensitivity to changes in a specific environmental factor such as heat together with that creature’s ability to avoid exposure to unacceptable factors, such as moving to cooler locations. Other vulnerabilities arise when sources of food and shelter change or are lost as climates shift. Ultimately Chris and his colleagues pulled together the information and completed climate change vulnerability assessments on 400 of Michigan’s wildlife species. As Chris describes in the first video segment, the DNR’s vulnerability assessment addresses the risks of population decline by mid-century due to changes in Michigan’s climate. Given the amount of carbon dioxide already in our atmosphere, there will be a 5 degree Fahrenheit increase in average temperatures and a drying of many soils across Michigan by mid-century. The vulnerability assessment shows that many our wildlife species will not be able to cope with these changes. VIDEO – SEGMENT 1

Other climate changes are also already underway, with more anticipated. For example increases in the frequency and severity of extreme storm events have been measured over the past couple of decades and climate models indicate a continuing increasing storminess in the decades ahead. Although these storms include severe downpours, the water runs off quickly to cause flooding downstream, but fails to return lasting moisture to the soils.

Some examples of climate-vulnerable wildlife species are frogs, toads and salamanders. Chris points out that these species tend to breed in temporary spring ponds that often dry up in the summer. However, temperature increases and highly variable storm events, as well as human development, are already reducing these temporary breeding ponds. Population decline is already evident with some species like the Blanchard’s cricket frog. VIDEO – SEGMENT 2

In fact, about 2/5ths or 40% of the 400 wildlife species evaluated are significantly vulnerable to the climate changes expected over the next 20 to 25 years. Chris provided a number of other examples of wildlife species that are considered vulnerable and not likely to be able to cope with the new climate of mid-century Michigan, including ruffed grouse and moose. 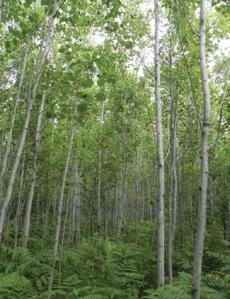 In some cases, the vulnerability of a species is to the loss of habitat caused by climate change. Chris pointed out that ruffed grouse depend on young aspen forest habitat in Lower Michigan. However, young aspen forests are threatened by drying soils. With less habitat, there will be far fewer grouse. VIDEO – SEGMENT 3

The extent of wildlife changes predicted in the report by mid-century in Michigan was quite stunning to me.  But, as Chris reminded me, these changes are only the beginning. If discharges of carbon dioxide, methane, and other greenhouse gases continue at current levels, our state’s climate will be similar to present day Arkansas by the end of this century or sooner. Under those circumstances, there will be no northern wildlife species in Lower Michigan. VIDEO – SEGMENT 4

When I asked about what’s being done to address these concerns, Chris described DNR’s efforts to better manage wildlife habitat under changing conditions, including efforts to protect habitat. For example, the state built a series of dams many years ago to create flooded and wet wildlife areas. Given the increasing severity of storms and the age of these dams, substantial improvements are needed to protect the habitat. Chris also described a difficult policy discussion now underway in the DNR about the possible re-location of wildlife species. The question is, should wildlife managers move or transplant endangered species areas in the south to new locations further north to help them survive the changing climate. For example, existing populations of massassauga rattlesnake are unlikely to survive without intervention. But it they are to be moved, when and where? The so-called translocation of species is becoming a very hot topic among conservation scientists. VIDEO – SEGMENT 5

In closing our discussion, Chris said there are lots of outdoor enthusiasts from hunters and fishermen to birders and hikers who are raising their voices of concern. He described an effort to bring together a large number of conservation organizations to help wildlife management efforts in coping with climate change – Beyond Seasons End (adapt.nd.edu/resources/1069). Repeating the words of Dan Ashe, Director of the U.S. Fish and Wildlife Service, Chris said that climate change presents humankind the challenge of our century.

Recently, I was invited to help program staff members and building management personnel at the Tollgate Farm Education Center through a strategic planning process.

Jointly held by the Americana Foundation and Michigan State University, the Tollgate Farm Education Center is an incredible resource for food and farming education in an urban setting. As I see it, Tollgate is poised to teach the basics of urban agriculture and food-systems management for greater community resilience across Southeast Michigan.

Hemmed in by the 12-Oaks Mall, the City of Novi, all that Oakland County sprawl, there’s a 160-acre farm that dates back to Michigan’s beginnings.

Moving to the property in 1836, John Basset later built the farm house that still stands on Meadowbrook Road at the Tollgate Farm Education Center. Adolph and Ginger Meyer bought the farm in the 1950s and preserved it as a working farm and educational resource held in trust by the Americana Foundation.

Thanks to an unusual partnership between the Americana Foundation and

Alan Jaros is the new director for educational programming under Michigan State University Extension (MSUE) at Tollgate. Hitting the ground running, Alan has been pushing to build urban agriculture training opportunities, enhance educational resources on site and increase visitation. All of which add new demands on the facilities and staff members and requires inter-organizational and inter-agency cooperation.

Thankfully, his colleagues at MSU, the Americana Foundation and a number of community-based organizations have agreed to join

Alan in a discussion about the future. And all agree that Tollgate is a critical resource for natural resources, agriculture, and food-systems training in Southeast Michigan. With some work and thoughtful dialogue, there will soon be a plan for coordinated action that provides a clear vision and achievable goals for immediate and long-term development of Tollgate Farm Education Center

A Note on Facilitators 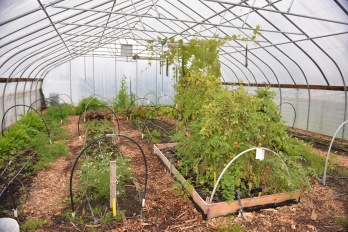 Sometimes long-standing and mature organizations need to occasionally to re-evaluate their mission and goals, assess progress, and consider changing conditions. Facilitated discussions can help managers and program staff reaffirm effective relationships and respond creatively to the opportunities emerging from change.